Alpha Weekends Are Back! 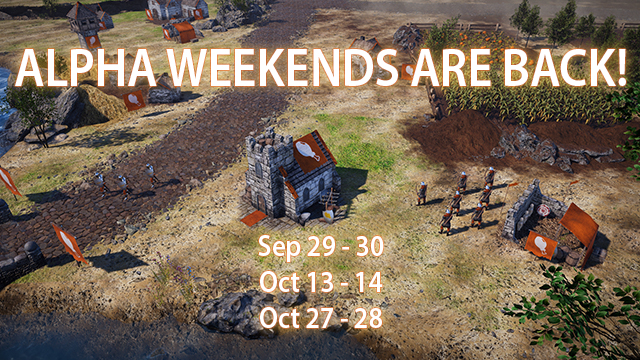 After two successful multiplayer alpha sessions during the summer, we are now happy to announce a new turn of the Bannermen alpha tests! This time, the sessions will be held three weekends close to each other; Sep 29-30, Oct 13-14 and Oct 27-28. In between each session, based on the feedback we get, we will adjust the unit balance and make smaller gameplay improvements. Our goal with these sessions is to test the newest features and come out with a fun and re-playable multiplayer gameplay.

So what's new in the upcoming sessions? The past two months we have been working on both improvements of the existing gameplay and adding new features. Here are the biggest news:

- We have introduced a hero system, which allows each team to produce a hero unit. The heroes available are Lord Berrian, Lady Vanya and Lord Karthor, which can be levelled up during the game, by collecting XP points when enemies nearby are being killed. When levelling your hero, he/she will become stronger and unlock more powerful spells. To ease the levelling process in early game and to emphasize the importance of map control, we have also introduced "nature camps" on certain spots on each map. The camps consist of AI units which can be killed to gain extra XP without confronting another player.

- A new structure, Hero's Throne, has been added. Each team will start with such a structure, located near the first Gathering Base. In the Hero's Throne you choose which hero you want to produce. The structure itself has a standard range attack, and will thereby also figure as a basic defense to prevent extremely early rushes.

- A new unit, Scouting Hound, is now in the game. The hound is a very fast unit, suitable for scouting your enemy. On top of the ordinary 6 workers, you will start each game with a Scouting Hound.

- We have boosted the economy by increasing the number of workers allowed in resource lots, from 8 to 10 in the Lumber Mill and from 4 to 5 in the Gold Mine.

- Catapult changes: We have implemented a required minimum distance to launch a catapult shot. Furthermore, the shots are no longer homing - the catapult stone will land on the location where the target was located when the shot was launched. These changes make the catapult less powerful against units, but still very powerful against buildings.

- We have reworked some parts of the navigation and movement system, resulting in a smoother unit movement and better pathfinding.

- Lastly, we have made several balancing adjustments, added more tool-tips and fixed some bugs in the game.

We hope you are as excited about the upcoming sessions as we are! Make sure to invite all your friends to the Bannermen Discord to claim Steam keys. If you already got a key, it will be valid throughout the sessions.

So let's meet up on Discord and make these alpha sessions even better than the first ones!